Have you ever wondered how cows and potatoes might be affected under climate change in the UK? Scientists at the Met Office have, in a recent paper published this month. The lead author, Dr Freya Garry spent the first 6 years of her life on a farm in Cumbria, before moving to the Isle of Man. Freya has always loved the countryside, and has fond memories of rural science lessons including helping to raise chicks and sheep at her school. Her love of the natural world took her to study ocean science at university before becoming a climate scientist. Freya will be discussing her research at our next major event, Climate Resilience for the Culm, on 29 April. You can view the event recording here.

This new research finds that future thermal heat stress in dairy cattle is likely to be greatest across England, and particularly in the South East around the London area, where in 30 – 50 years’ time there may be up to 2 months more per year where cattle are stressed compared to the present day. In our local area, the South West, the region of the UK that contains the most dairy cattle, there may be 10 times as many days per year on average when cattle are stressed.

In our local area, the South West, the region of the UK that contains the most dairy cattle, there may be 10 times as many days per year on average when cattle are stressed.

Potatoes are vulnerable to a disease called late blight, which occurs in warm, humid weather. The conditions where blight occurs are likely to occur more often in the future across the UK, with the greatest increases in western regions. Most potatoes are grown in the east of the UK, where potato blight occurs less often, and so there are likely to be smaller increases in these key regions for potato growing (20-30% increase in potato blight occurrence). However, in east Scotland, a region which currently has a high concentration of potato farming, potato blight may occur around 70% more often. In the South West, the risk to potatoes is projected to increase by only around 10%.

The research provides maps of how likely heat stress and potato blight conditions are to occur across each 12 km grid box of the UK, which can provide adaptation planners with important local information about where action needs to be taken. The scientists also combine hazard information with vulnerability information (e.g., the threshold at which heat stress is going to be harmful) and exposure information (e.g., where cattle are raised) to produce risk estimates of which UK regions have greatest risk now and in the future. 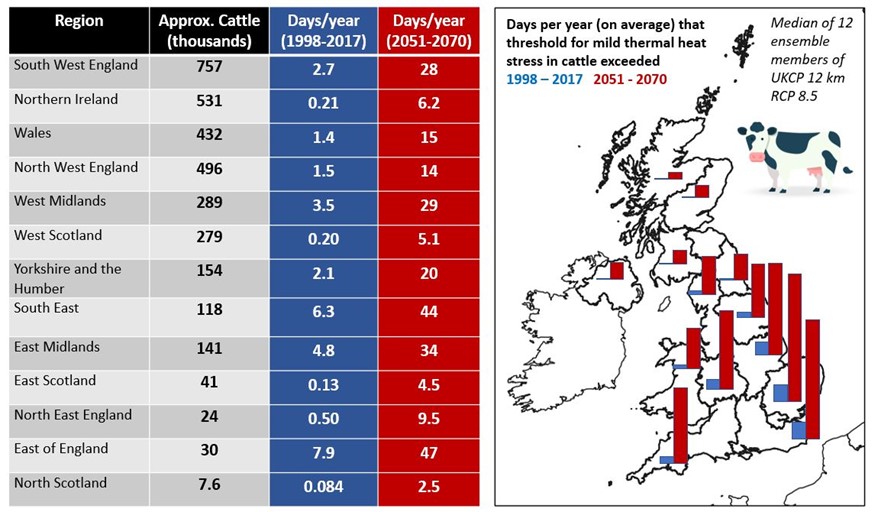 Both food for cattle, crops for humans, and potato growing are all likely to be affected by drought, which we tend to experience when we have particularly hot dry summers, such as 2018. Recently, another group of scientists from the Met Office demonstrated that the summer temperatures of 2018 may occur every 1 in 2 years by the middle of the century (McCarthy et al 2019). In this work, the scientists also look at how often we are likely to see both hot and dry months during summers through the twenty-first century, and how this is likely to increase.

This new work shows how examples of a particular type of weather hazard, called a compound event, are likely to change under twenty first century climate change. Compound events happen when one or more weather hazards occur at the same time, for example, very hot and very dry weather, or very windy and very wet weather. We often experience more serious impacts when two weather hazards occur together rather than separately, or when they occur close in time or close in space. Both case studies involving thermal heat stress and potato blight conditions occur when temperature and humidity combine.

The estimates of future change are made using the UK Climate Projections focusing on projections of the future climate under the RCP 8.5 scenario. This is a high emissions scenario above estimates for current global emissions policies, but which enables consideration of 2–4 °C of global temperature increase over the 21st century, the range for which the Committee for Climate Change (2019) recommends UK sectors should plan adaptation*.

You can hear Freya discuss UK climate change and her recent work at our next event ‘Climate Resilience for the Culm’ on April 29 at 4:30 pm – 6:00 pm.

*‘Although the UK is committed to working for global action to parallel our own adoption of a net-zero statutory target, it is prudent to plan adaptation strategies for a scenario of 4°C’. Executive Summary, Progress in preparing for climate change – 2019 Report to Parliament, Committee for Climate Change.