Culm wildlife – what’s been spotted? How can you get involved?

Wildlife spotting emerged as the second favourite activity* people participate in when out and about around the Culm and its tributaries. But what types of wildlife can people expect to see and what has been spotted? In this article we’ve pulled together four sources of data to answer this question. Thanks to people’s love of nature and willingness to send in their observations, we’ve had access to data that was submitted in 2020 by people who completed the CtC Wildlife Survey and also from the Culm Citizen Science Investigations (CSI) volunteers who record wildlife sightings as part of their CSI water quality surveying (here’s the recent water quality update ‘scorecard’ for the Lower Culm in 2020). In addition to that, we’ve also had a look at two Culm-specific datasets from the Devon Biodiversity Records Centre (the Biodiversity Audit 2019 and the County Wildlife Site Survey for Hele North). The Culm catchment is a large area, with over 100 designated sites and three nature reserves; there are over 50,000 individual records! This summary is very much what the records say and some species you might see everyday might not be mentioned but that doesn’t mean they’re not about – all the more reason to get involved and get your sightings counted! 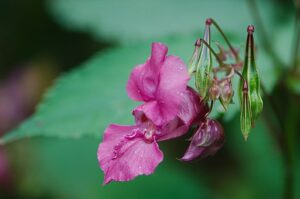 Among these mosaic plant communities birds and insects abound and a few mammals have been spotted too! In the formal surveys otters have been recorded on all of the rivers and otters have been seen in 2020 and 2021. Several species of bat have been recorded and evidence of moles – mole hills – were spotted in several places, though the elusive creatures were not themselves reported. Fish were spotted (no detail on species unfortunately) – and caught, angling is a moderately popular pastime in the Culm*. Reptiles spotted were grass snakes, slow worms and lizards. Of course we couldn’t not mention the endangered White-clawed Crayfish (and it’s invasive American cousin), which was the focus of the Culm Community Crayfish project.

Over 1,200 species of insects have been recorded, with 525 species of true fly and 419 species of moth. Some 15 insect species were spotted in 2020 including 7- and 16-spot ladybirds, grasshoppers, Roesel’s Bush Crickets, moths, butterflies, spiders, pond skaters, dragonflies, hoverflies, mayflies and Blue-tailed Damselflys. In terms of beetles, these include the nice ‘black-margined loosestrife beetle’ (Galerucella calmariensis) – whose host plant is Purple Loosestrife, a typical riverside wildflower in good habitat along the Culm (seen at Killerton during CtC fieldwork last season). 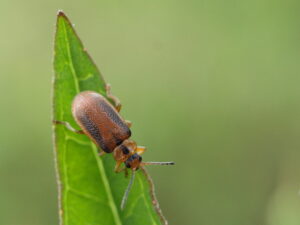 Two other very exciting spots were also made: the European Chinchbug and the White-legged Damselfly.

A large colony of the European Chinchbug, a recent arrival to Devon, was spotted in Hele Marsh in June 2020. The European Chinchbug is a marshland species associated with grasses such as reed-grass, flote-grass, tufted hair-grass and common reed. The fragmented nature of wetland in lowland England means it being spotted in the Culm catchment is particularly special! 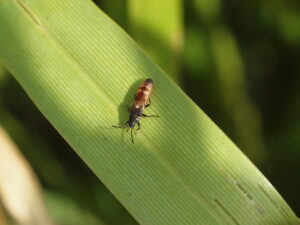 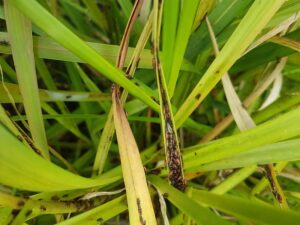 Another uncommon species spotted was the White-legged Damselfly, which is the subject of a recording campaign by the British Dragonfly Society, particularly in Devon and Cornwall. It was spotted at Hele Marsh in 2011 and 2020, which is great news as it means the habitat there remains in good condition. As with a lot of other dragonfly and damselfly species, it requires slow-flowing water with associated vegetation and therefore making sure the ponds and emergent plant species are conserved and even new ponds created, is really important. Population and habitat monitoring might interest some of our amazing Culm volunteers! 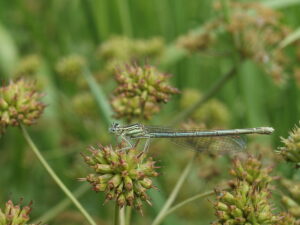 We’re currently working with several organisations to support people in getting more involved – Covid safely – in one of the many wildlife surveying opportunities in and around the Culm. We’re working with Lydia Deakin – CSI Coordinator for the Westcountry Rivers Trust, Verity Jones – Volunteer Coordinator for the Blackdown Hills & Quantock Hills Areas of Outstanding Natural Beauty (BHAONB) and Jess Smallcombe – Community Ecologist, Devon Biodiversity Records Centre (DBRC).

There’s lots to consider in the context of the current pandemic so we’re investigating lots of options – online and in-person – that might include virtual/physical workshops/training on indicator species and a survey toolkit, so that people are ‘field ready’ for in-field monitoring later in the project. Watch this space!