Devon’s beavers are back!

The 6th August 2020 will go down in history as a very significant day. When Environment Minster, Rebecca Pow, announced that the Eurasian Beavers living wild on the River Otter in East Devon would be permitted to remain permanently, and expand their population into neighbouring catchments, it marked the first permitted reintroduction of a formerly extinct mammal into the English countryside. It followed a similar move in Scotland in 2016.

The decision followed the successful completion of the five-year River Otter Beaver Trial and the publication, by the Science and Evidence Forum, of a detailed report of the findings of the scientific research undertaken since 2015. This Forum was chaired by Professor Richard Brazier from University of Exeter, who oversaw the research, and manages a group of scientists working on the effects of beavers on wetland environments and landscapes.

Prior to that in 2019, the Steering Group, comprising a wide range of national organisations with diverse views on the subject and varied interests, had published a Beaver Management Strategy Framework. Beavers do need management, and all of the partners involved with the Trial recognised that. As a result, this document outlined how the beavers would be managed in the River Otter for the next 10 years should they be permitted to remain.

With the Culm being the neighbouring catchment with the largest ‘border’ with the Otter catchment, it could be anticipated that moving into the Culm is highly likely – although when that will happen is obviously unknown. This comes with the challenges and opportunities described in this article, with the Connecting the Culm project and particularly the 25 year Blueprint being in a great place to plan and oversee how these are managed – to deliver the huge benefits that beavers could bring for people and wildlife.

Key Findings of the Trial

Some of the headline findings from the Trial include:

• The River Otter beaver population had increased from two family groups in 2015, to occupy around 13 territories by March 2019. With only 3 mortalities reported and the population dispersing throughout the main stem of the river and some of the other tributaries, the catchment is clearly capable of supporting a healthy, expanding beaver population.

• Public perception surveys conducted of 2,741 people nationally found that 86% supported beaver reintroduction in 2017. This had risen to 90% by 2019.

• Beaver dams are not built in larger rivers or streams. Beaver Dam Capacity (BDC) modelling showed which watercourses were capable of supporting beaver dams, and a snapshot survey conducted in October 2019 found a total of 28 dams across six of the beaver territories. These dams allowed the modelling to be verified, and showed how the dams in larger faster streams were much more dynamic structures as they reached the limit of their viability.

• A sequence of beaver dams constructed upstream of a village at risk of flooding has seen a measurable reduction in peak flows as a result of the dams and wetland created.

• The beavers have also caused significant ecological benefits with increases in water vole populations, as well as wildfowl such as teal and snipe in new wetlands created. One County Wildlife Site has seen an increase in its condition due to the changes in vegetation structure and enhanced water levels.

• Five sites have seen land drainage impacts on agricultural land, with feeding seen on riverside maize in three territories, and dams built specifically to access maize crops in some cases. Small riverside orchards have also experienced beaver feeding, both on windfall apples and the trees themselves. Mitigation techniques have been deployed very successfully where problems have been encountered, but the importance of rapid and pragmatic advice and support for affected landowners is highlighted.

• The ecotourism benefits for some local businesses have been significant, although those who benefit from beaver re-introduction may not always be the same people who bear the costs.

• Detailed health screening of the beavers by zoological specialists throughout the Trial concluded that beavers presented no significant risk to human, livestock or other wildlife health. 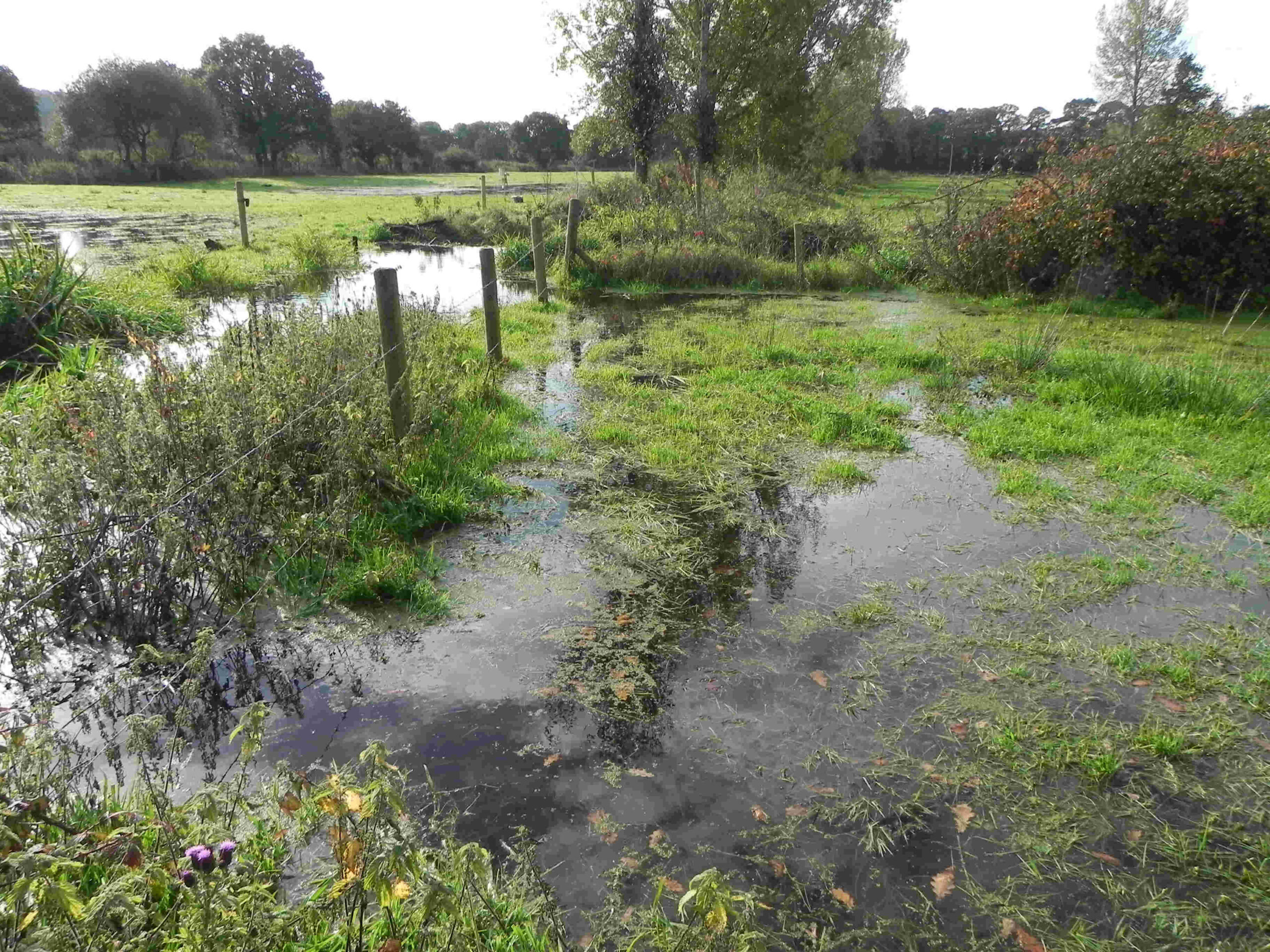 Benefits of beavers on fish

One of the most exciting findings of the Trial has been the remarkable restoration of natural riverine processes, and the knock-on effects on ecology and particularly on fish species. Where beaver dams have been built in streams that have been dredged and straightened by engineers and farmers over the years, the effects have been remarkable. New meanders are created and natural stream riffles and pools are restored. Spawning areas have been created for trout and bullhead in the gravel beds, and lamprey, eels and the larger trout enjoy the deeper siltier pools that temporarily form behind the beaver dams. The import of woody material into watercourses by beavers is now even replicated by organisations like the Wild Trout Trust who see the importance of naturally functioning watercourses complete with fallen trees and woody material within the channel.

Unfortunately there are still anglers that believe that beavers eat fish, or that beaver dams are going to impede the migration of salmon upstream, and organisations representing these views are lobbying for the restoration of beavers to our landscapes to be halted. 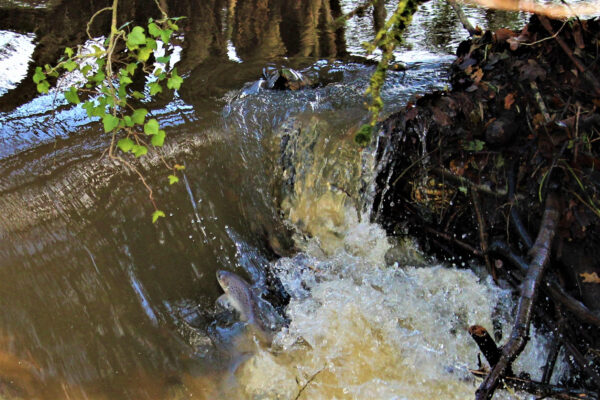 Beavers are the ultimate water engineer and restore natural streams and wetlands, felling trees and blocking watercourses. However, the English landscape is a largely artificial one and our watercourses have been heavily modified and tamed by humans over millennia. Beavers will therefore inevitably cause conflict and it is vital that proactive management and landowner support is integral to any reintroduction.

One of the simplest but most effective measures that should be taken is providing more space for our watercourses. Moving infrastructure and farmland back and providing a decent buffer strip would have multiple benefits for our rivers and streams, and the fish and other wildlife that lives in them. It would also enable beavers to maximise the benefits they can provide by restoring wetland corridors and reduce the conflicts that they may otherwise cause. 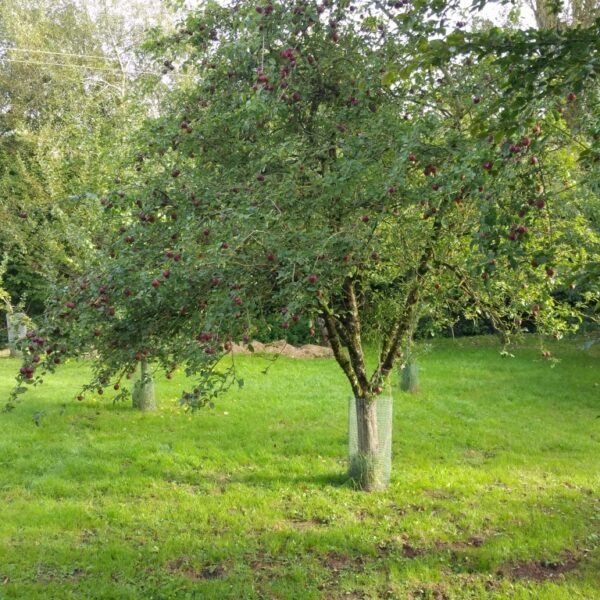 Riverside apple trees can be at risk of beaver feeding but can easily be protected using wire mesh. (Picture by Jake Chant / DWT)

The decision that the beavers can remain on the River Otter, and expand their populations into neighbouring river catchments, whilst very welcome, is only the first of many decisions that now need to be made about beavers in England. There are already wild beaver populations cropping up in other rivers in England, such as the Tamar, Wye and Stour and many organisations are keen to introduce them elsewhere. How will these populations be viewed, safeguarded and managed, moving forward? Will licences be granted by Natural England for new releases elsewhere and will funding be made available for their ongoing management, and to support landowners wishing to give the beavers and their new wetlands enough space. These are all issues that are likely to be included in a government consultation on the issue likely to begin in November. However, with the right policies in place, we should soon start to see this charismatic species cropping up in rivers throughout the country.

Thanks to the following:

Funding from the Department for Environment, Food and Rural Affairs (Defra) was provided to extend the Trial so that a government decision could be made. This support is continuing to provide time for wider decisions to be made about future funding and management models.

A recent film by the Beavers Trust gives some more insights into the benefits of beavers with some wonderful footage.