The politics of soil

Unless you work on the land, or have an interest in it, it might have passed you by about how important soil is.

Beneath our feet, this ubiquitous natural resource, with its wide variety of type such as clay, sandy, silty, peaty, chalky, and loamy, can be easily ignored.

Here Yog Watkins, of the Westcountry Rivers Trust, shares his view on how soil plays a major part in natural flood management.

“We have been gradually moving away from the unsustainable, but long-established paradigm of eat more, buy more, produce more. It’s a slow process but interest in more sustainable land management is taking off. At Westcountry Rivers Trust we have seen this first-hand.

Changes in weather patterns, and the havoc major natural events can wreak, have made the Government and those holding the purse strings invest in natural flood management and slow the flow of water through river catchments. And that’s where soil comes in.

The floods at Tewksbury (2007), on the Somerset Levels and along the Thames (2013/14) and in Cumbria (2015), brought catchment hydrology to the fore. Just before Christmas last year, Hayle in Cornwall suffered from flash flooding with part of the A30 closed.

Natural flood management isn’t a new concept, but it has leapt up the priority list. Essentially, it works with the landscape to reduce the rate at which rainwater reaches the wider river system.

Well-structured soils are a classic ‘win-win’ scenario for the environment and farmer. Landowners will see improved yields, greater windows of opportunity for cultivations, and increased grazing time at the beginning and end of the year. Local watercourses will see reduced peak flows and more consistent flows through prolonged dry spells, and there will be greater aquifer replenishment, all of which would benefit river ecology.

It can often be the most important part of a process, which is superseded by easier options. For example, much time and energy has been devoted to the ‘recycle’ element of ‘reduce-reuse-recycle’ mantra, while the more effective and useful ‘reduce’ and ‘re-use’ options have been inadvertently by-passed.

Similarly, soils play a pivotal role in catchment hydrology, and soil condition should always be the first option to be investigated.

Soil organic matter plays a major role in soil health and hydrology. A soil that has a high porosity can have inherently low organic matter levels but reducing these levels further through land management (overworking, continuous cropping etc.) can increase the risk of erosion and reduce its porosity and nutrient cycling. Soil organic matter helps a soil to process nutrients, moving them from the unavailable state to a plant-available form, while also giving the soil greater structural stability. This stability allows water to flow through the profile and reduces the risk of slumping or capping, both of which can increase surface run-off and influence flooding. 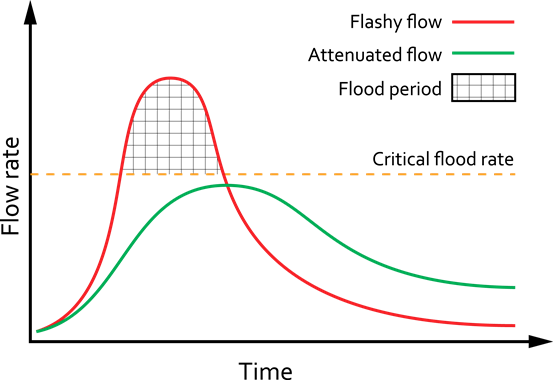 The approach to soils needs to be the same as that used for dealing with diffuse water pollution from agriculture. [By “diffuse pollution” we mean the gradual amalgamation of many small minor pollution incidents towards a level of pollution that has a detrimental effect upon water quality downstream.] Addressing each of the individual small incidents contributes to the improvement of water quality in the catchment. Soils and their impact on hydrology are very similar; every field, or part field, that has an improved soil structure will have a positive influence on water flow. At an individual level this may be minimal, but collectively at a catchment scale this can lead to significant reductions in volumes of rainwater reaching the watercourses shortly after rainfall, lowering the risk of flooding and making the landscape more resilient.

Farmers trying to run profitable businesses are under pressure from price fluctuations. This can lead to less thought given to long-term strategic and sustainable issues. As soil plays such a vital role in our environment, here at Westcountry Rivers Trust we deliver several projects to support farmers in positive land management techniques. This includes the launch of the Devon and Cornwall Soil Alliance in 2019 and funding schemes to enable farmers to implement natural flood management interventions.

But perhaps it is we the consumers who also need to ask ourselves: should we be offering farmers financial incentives to carry out soil mitigation work? Or do we pay a fairer price for our food, giving them the money to reinvest into their businesses and our landscape?”