This week I’ve been exploring the mouth of the River Culm, the place where the river meets with the Exe before finally making her way down to the sea. For years I’ve driven through these two villages on my way to Bickleigh or Tiverton. I’ve often noticed the churches, St Mary Magdalen in Stoke Cannon and St Mary the Virgn in Rewe. It interested me to have two St Mary churches, to the two different Mary’s right next to each other. First I was met with a warm welcome at St Mary Magdalen’s. On the day I chose to go, they were preparing for a festival there. It was called ‘Over the Rainbow’ and they were celebrating the NHS and what people have been doing in lockdown. It was colourful and there was an excited atmosphere of, mostly women, preparing displays and stalls. The church immediately struck me as unusually cosy. I realised that a partition had been placed halfway down the church and there were no pews. When I chatted to a local woman, she told me that the community had gathered in a village hall in the past, when the church needed a new roof. As they gathered, they naturally formed a circle to worship and they realised that they preferred this to the more formal church setting. So they decided to rearrange their church. I’m not a regular church goer, but the cosy intimate feeling in the church, more like going into a beautiful room, made me determined to return.

I was also struck by the wonderful Victorian stained glass windows. Here the Magdalen (always a controversial figure in Christianity) was represented not once but three times. I loved seeing her, first with her pot of spices, then with a book of learning and finally over the altar, greeting the risen Lord. Around the back of the church I wondered if I’d find the river, but the churchyard backed onto a school and noisy playground. I made my way to Rewe church, just a few minutes drive along the road. Rewe churchyard seemed to greet me with dark trees whispering as if conspiratorial. The church was locked. It felt very different. But when I walked to the back of the churchyard, I met a wonderful view! The bank dropped away quite steeply and there winding her way, gracefully through the landscape was the Culm. The setting was spectacular and it felt to me that the proximity of the church to the river was no accident. Also the church being on raised ground felt somehow significant. I remembered Antony Firth, the archaeologist, telling me that there was evidence of stone henges and burial barrows in the landscape between Killerton and Rewe. A few nights later I dreamed that I was rocking in a cradle over the edge of the drop in Rewe churchyard. It was one of those dreams with an incredibly happy feeling. The sun was shining and I was with two friends, there was a feeling of nature all around and a gentle rocking.

I decided to go back to Rewe. But stopped again at Stoke Cannon on the way. I saw a sharp turn to the right after the church and went down it – there was the river! She was meandering her way in a wide channel under an old bridge. The first thing I noticed was lots of damsel flies. But then as I stood looking into the river, a song rose up in me. I wondered how many other women had stood by this river singing in the past, maybe as they were spinning or washing – or maybe like me, just daydreaming and feeling into their lives. I didn’t think too much about the words, just made them up as I went along. 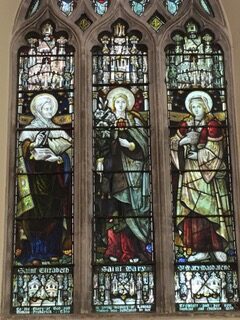 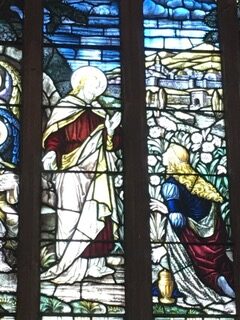 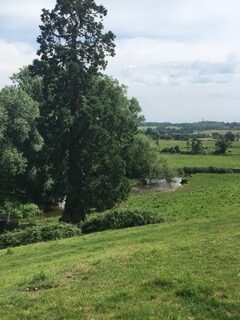 But afterwards, the focus on eyes and tears struck me – Of course! Mary Magdalen washed Christ’s feet with her tears. And there were also several eye wells known of along the Culm. It was a clue – to what…not sure yet. But I felt the presence of the crying women from the past and Mary Magdalen amongst them. And up above, sitting in a row, like a string of beads, on a telegraph wire, were swallows. From time to time, as I was singing, the swallows would swoop in over the river: 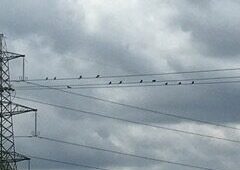 Extraordinary migratory birds! And later I’m reminded of the Beaker people, who probably built the Wood henges at Rewe. Again there’s some controversy about them. But mostly now, it’s understood that they were a migratory people. People migrating thousands of years ago, returning to this landscape, like the swallows. And what about now? Is it in our blood, do we still long to migrate? And how do we greet those who migrate here – after long difficult journeys. The movement of people, roads in July, jammed packed. I wonder if the river was once jammed with boats, the river bank busy with people walking along, moving, traveling, to trade, to explore, to pilgrimage, to find a new life.

I’m aware as I dream my way into the landscape, that I’m seeking to create stories that will open up a deeper connection with the river for many. I know from experience that the stories need to be reasonable straight forward – to delight and reach both children and adults. Sometimes at this stage in the story process it can feel …a bit complex…how will I ever weave simple, beautiful, touching and memorable stories out of this complex brew of random events and musings? But I trust the process. 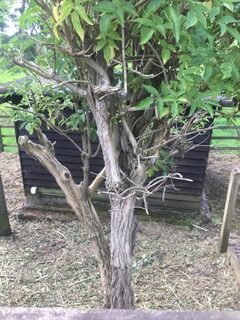 An Elder tree – can you see the River Witch?

Something is emerging. A bit more time needed yet. A trip to the ‘Devon and Exeter Intitution’ next week. I discovered it by chance a while ago – just off the Cathedral Green in Exeter, a door was open as I walked past. I was guided in by studious, bespectacled ladies – and what a treasure trove! A Victorian library, high ceilinged with an antique table in the centre. All around, reaching up high, were rows upon rows of leather bound books – there was a smell there of something, a bit musky but intriguing…the smell of knowledge, like magic…hanging in the air. What might our ancestors have recorded about the Culm? What nearly forgotten treasures might I unearth here?……