Where is the folklore for the River Culm? It certainly doesn’t jump into my hand.

Researching in the libraries this week, so many people stepping forward to help me. The librarian at Exeter Central gave me a mountain of books on Devon folklore, several containing maps with every area of Devon covered….except the Culm valley. The Exeter and Devon Institute offered me volumes of wonderful songs and more folklore from Dartmoor, but nothing specifically about the Culm valley. At first this was frustrating. Then it became interesting. There will have been folklore spoken in this area but why has it not been written down? The story of the Fisher King is about the healing being in the questions. I’ll keep
asking questions!

In my previous research for ‘The Emerald Dragon book’ I struggled to find folklore about the Blackdown Hills, which span Devon and Somerset. It was an archaeologist who put a little book into my hands. It was called ‘Tales of the Blackdown Borderlands’ by F W Mathews (1923). The book was like gold dust but I had to return it. At the Exeter and Devon Institute Emma Jackson, the research director there, was incredibly helpful. We discovered that the book is only available in Cambridge and one other place that I can’t remember (it was far away!). As far as I can find so far, this little book – and my book – are the only places where traditional stories of the Blackdown Hills have been recorded. Now, I’m not great at marketing (massive understatement!). You won’t find my book on Amazon or any of the usual online places…so still the stories are hidden….I wonder if this is to protect them…I’ll keep asking questions – and telling stories.

In the Exeter and Devon Institute, Emma found me an article on the River Culm from 1878, in ‘The Western Times’ newspaper. It was kept in a box, with other papers, that was so huge we had to lift it together, we rearranged furniture and set up giant sponges to open the box. Once inside we found the date; July 16th 1878. The print was so tiny I had to read the article with a magnifying glass – it was worth it. A beautifully flowery account of an Exeter fisherman setting out to fish on the river Culm. It seems there was a lady on Exeter High street called Miss Osbourne, who sold the most wonderful collections of flies – in many colours and beautifully displayed, in my imagination they are like the butterfly collection at RAMM museum, exquisite and wonderful and the result of someone’s passion and obsession. Miss Osbourne apparently gave all sorts of advice about fishing not the Culm, she feels like someone who might like to appear in a story. The author of the article then talked about catching the steam train to the Culm valley, the best places to stay and describes in detail the very wonderful trout that could be found. He says they were by far the best trout in Devon rivers – golden as a guinea and decorated with orange spots, the flesh of the fish being flakey and pink and very superior to any fish you might catch in the Exe! 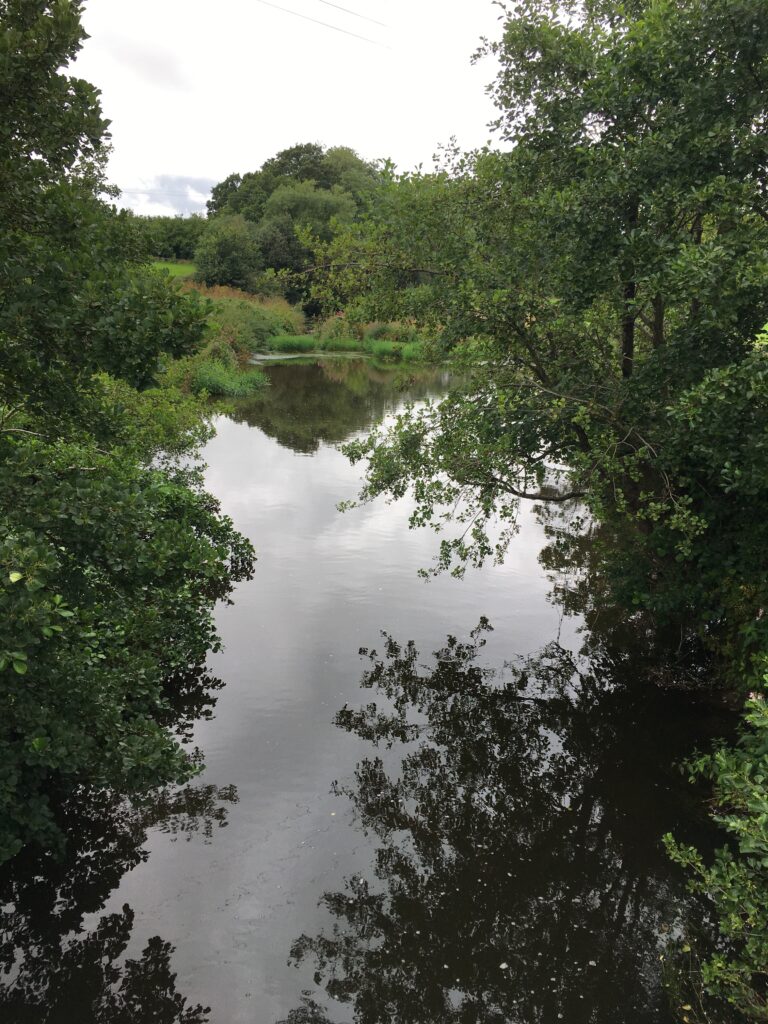 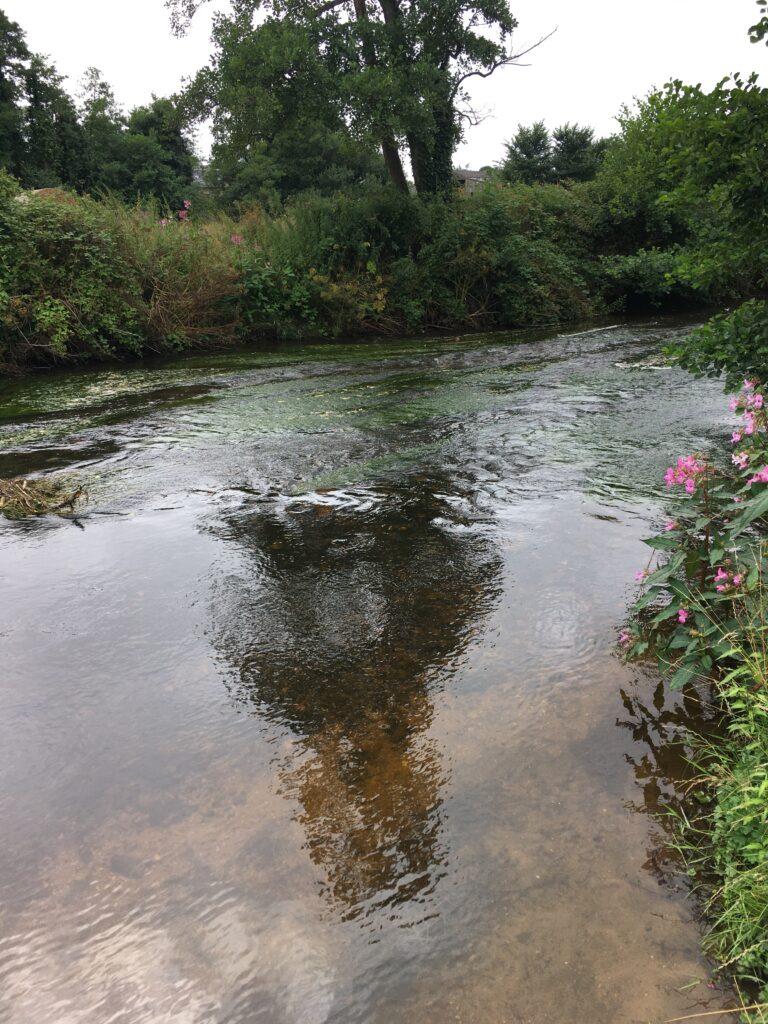 Click below to hear Clare telling some of the Starhorse story

I love this process of searching for long hidden stories, the things that jump out and allow themselves to be seen. The article on fishing and the writers passion for fishing in the Culm, ‘the most ancient river in Devon’ lends credence to my hunch about the ‘St Andrew’s church’s’ being to do with fishermen. The fish and the catching of fish in this landscape, the relationship between the people of the Culm valley and fish has been important for a long time. This suggests that there
was once a great abundance of fish, in 1878 there were! Wouldn’t it be wonderful if the river could be teeming with Golden, orange spotted trout once again! One other thing that has jumped out at me during my research has been the presence of American service men in Cullompton during the Second World War. I’m wondering how they were received, if people, women especially, found them exciting, intriguing. I’ve started another story about a stranger who arrives at the head of the Culm in very ancient times. A photograph of the three handsome service men from the 1940s made me wonder if the ‘Stranger’, in close knit communities, could be a theme. It reminded me that Ed Sheeran’s latest song was playing on the radio outside when I arrived at ‘The Holman’s Clavel’ pub, some builders were hard at work, Ed Shearan sang out:

Conversations with a stranger I barely know

Swearin’ this will be the last time

But it probably won’t 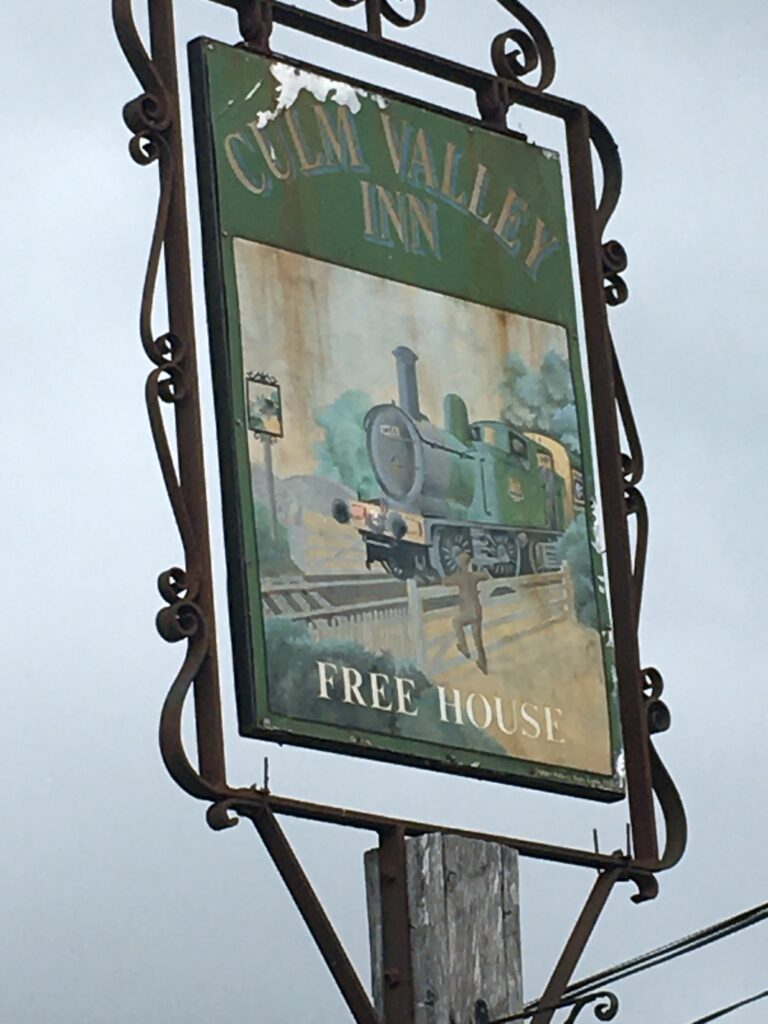 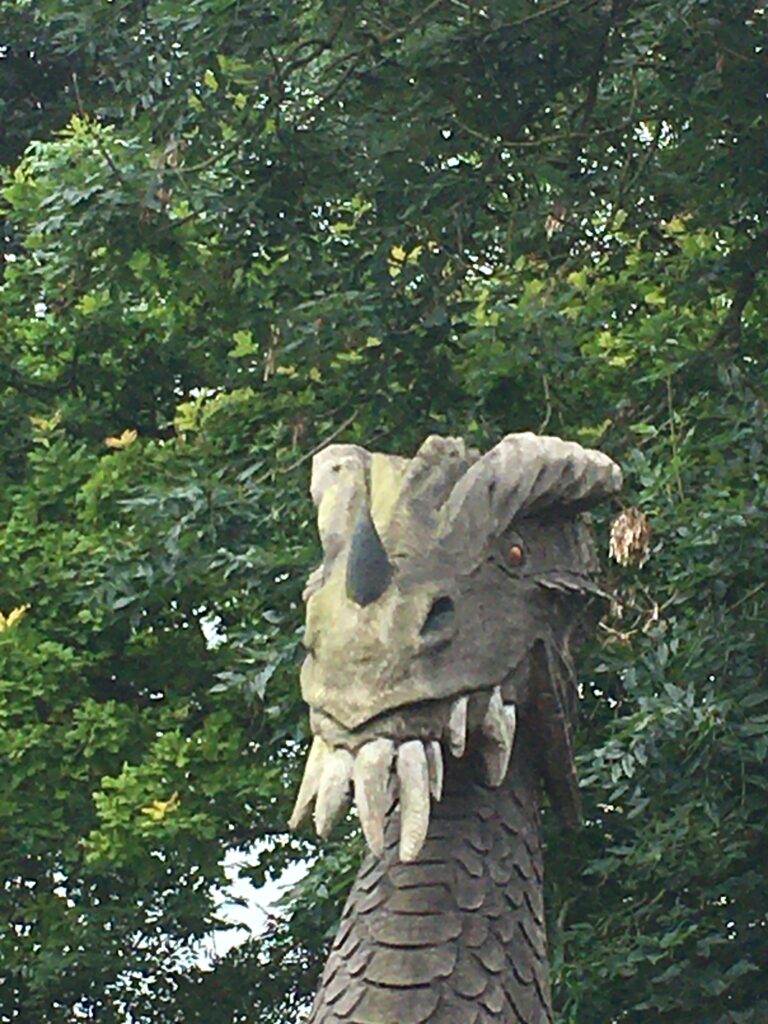 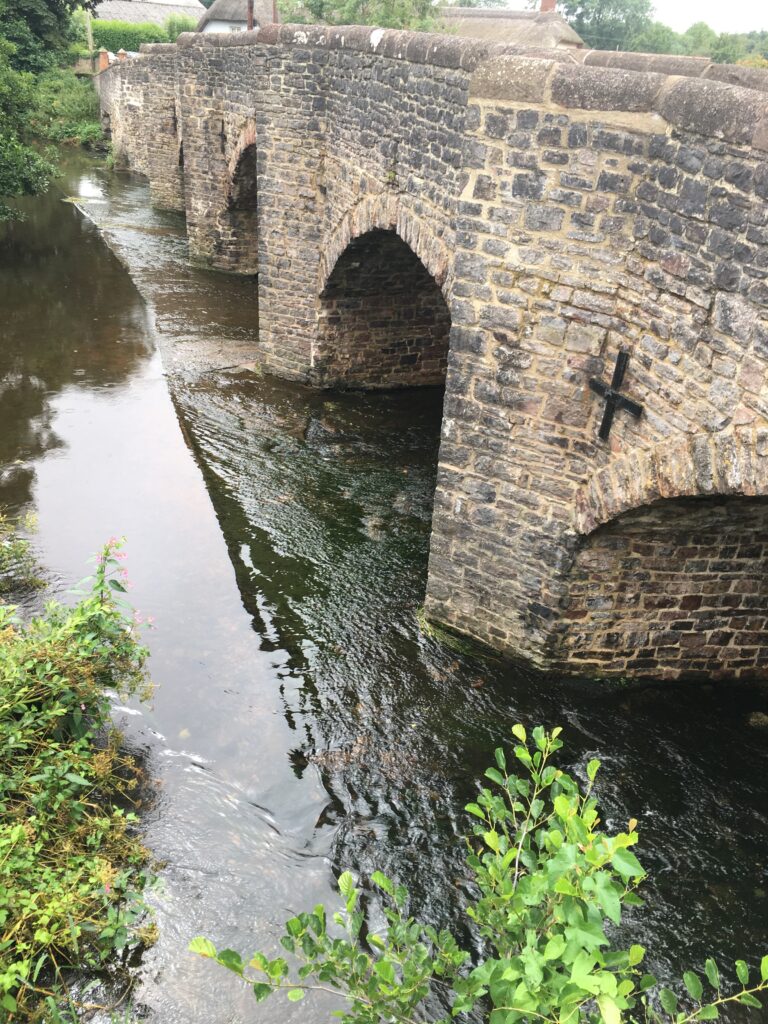 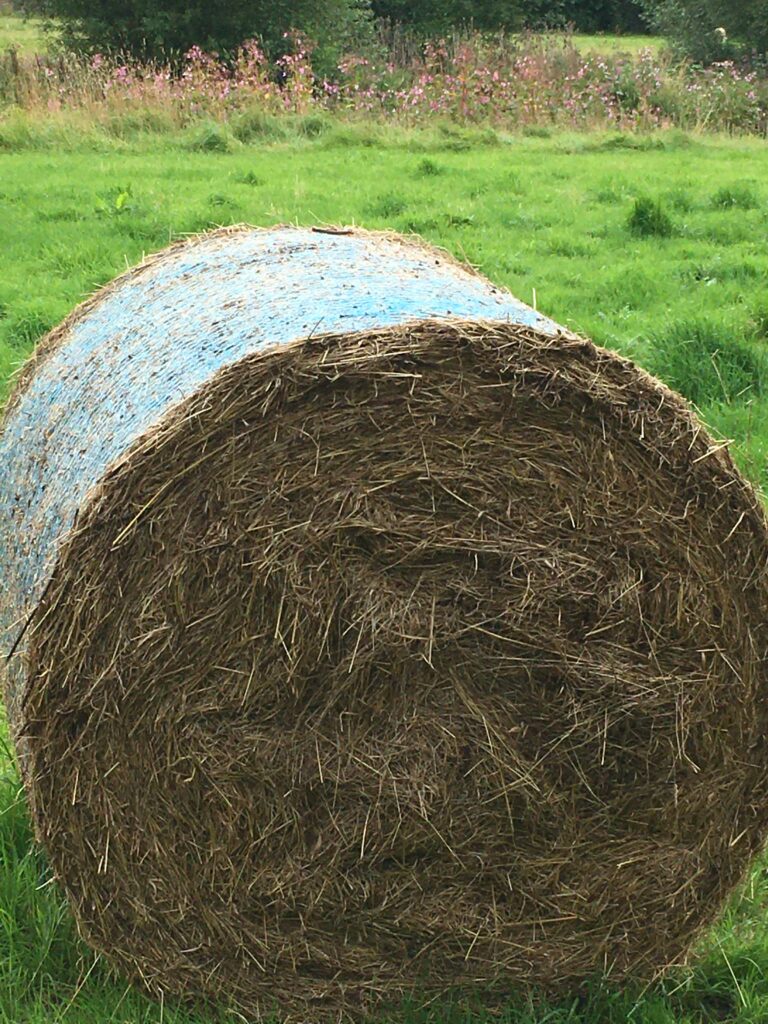 What is it about ‘the stranger’ that’s exciting, challenging. I can feel that I both want and don’t want the stranger at the same time. The song seems to be about a kind of edgy desperation, a longing and a hopelessness. What happens if I take the longing but let it be hopeful, let it be challenging but good for me, not bad for me. Take the shadow and dance with it without wanting it to destroy me. It’s easy to romanticise rural life.

In Culmstock the village was beautiful. In the fields all around was evidence of the hay being harvested. Huge bales speckled the land on either side of the Culm. The archaeological evidence is that people have used this land to grow hay for thousands of years. I walked along the river with my sixteen year old daughter. We started at the ‘Culm valley Inn’, where I found a dragon sculpture in the pub garden! The pub is right next to the river and had a wonderful community feeling. The pub sign a reminder of the steam train (another dragon) that once ran through the village. We followed the foot path beside the river and over a bridge where we were delighted to discover – three little pigs! Immediately I thought of the story, but then how it needs rewriting. In all the stories the wolf is bad, ‘The Big Bad Wolf’. Yet in reality there are no accounts of wolves attacking humans unprovoked. We’ve demonised wolves because we don’t want to share food with them and now there are none left on our land. It occurred to me that the Stranger is a bit like the Wolf, the ‘other’ one, the one we just reject and make bad. And how we can rewrite the story.

Heading out of Culmstock, I wanted to go to Cold Harbour Mill at Uffculme. The sat nav wasn’t working, so we tried to follow an OS map, we turned left and left again and ended up driving down a lane that got narrower and narrower. I had a feeling we were being ‘Pixie led’ – an experience that I’ve often had on the Blackdown Hills! I said a little prayer to the pixies – those nearly forgotten ancestors of the land. I reassured them that I’m doing my best to bring nourishing stories to this landscape. And then I saw it. A big sign on my left, a farm building and the land dropping steeply behind. The sign said, ‘Sidwell’s farm’. Now to most people this wouldn’t mean much – or anything, just a name. But to me it was an ‘Allaylooya’ moment! I have a very long relationship with Sidwell. She is a saint, the patron saint of Exeter, but little known. I met her in my first week in Exeter, twenty years ago, when a small book containing her story literally fell off a shelf in Exeter library and hit me on the head! Her saint’s day is 1st/2nd August, the Celtic festival of Lammas, the first harvest. She is always depicted with a Sythe, according to Christian tradition, this was the implement of her death, before rebirth. Often she is shown holding sheaves of Corn. She is clearly pre-Christian, complete with a ‘Wicked Step Mother’, her’s is a story of Celtic fairytale. I link her with the Greek Corn Goddess, Demeter. But the Devon/Somerset Goddess is also clearly linked to Water. I feel thrilled to have found evidence of her presence in the Culm valley. To me, (trust me, I’m telling stories!) the pixies led me directly to this place – St Sidwell or Sativola (her Latin name) wanted me to know about her presence here. Yet, really, it’s obvious – with all that hay! And yes, we did get to Uffculme, just before Cold Harbour Mill closed but in time for a look around and a quick cup of tea. More stories tumbling fast and determined, as the river that runs alongside the mill.

Please do get in touch with me if you have anything to share that might feed the pot of stories. clareviner@googlemail.com 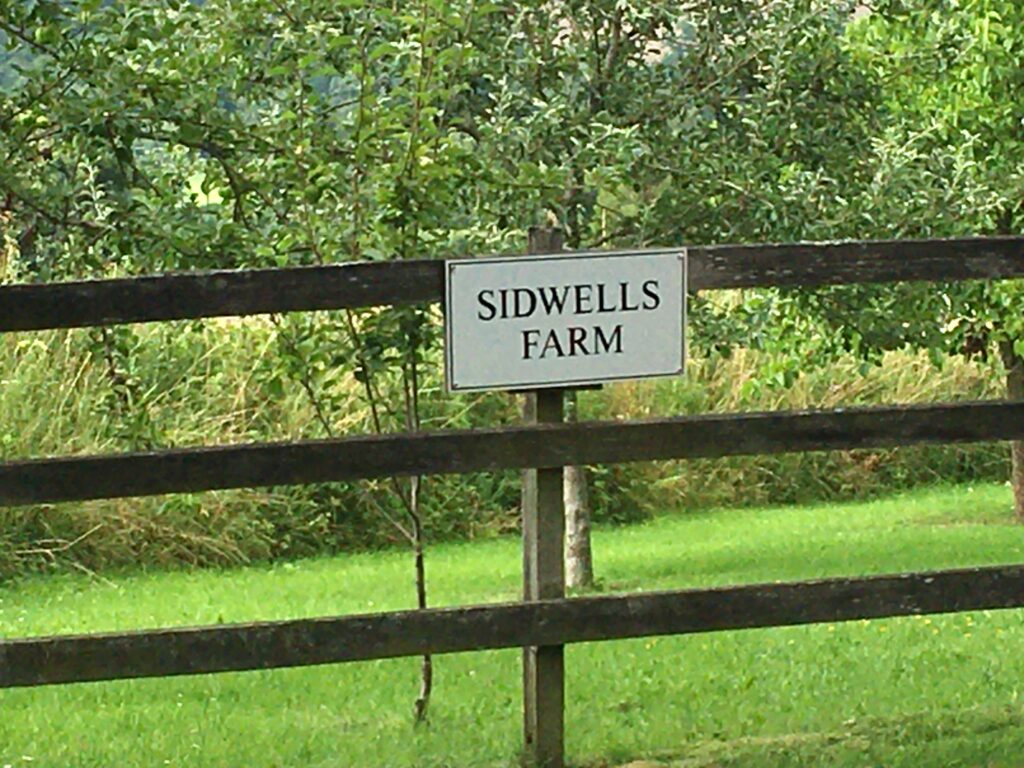