This week I’m reflecting on what I’ve learnt about the Culm so far. After speaking to Archaeologist, Antony Firth and Geomorphologist, Julian Payne – I realised that there is a theme that they both talked about – it’s change. The river bed has always been moving, changing, being diverted, returning to it’s natural course, flooding, possibly being re-routed by melted glacial waters. Both in the distant past and in the recent past, the river – and the riverbed – has been on the move.

In the Half Moon pub (the pixie pub, to me!) Julian and I looked at the OS map. He started to point out clues to me, reading the map as I might read a book. He showed me how the valley of the River Maldon is wider than the Culm valley – that this indicates a more obvious route for water to flow. I was resistant. I didn’t really like the idea. No, I thought, the Culm is the Culm. I don’t like things to change. I want things to be as I know them….yet they change…and they have changed and they continue to change…and right now, change appears to be happening all around us! 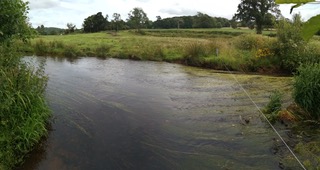 And stories are all about change – without change there would be no story. And stories change. In the past stories were told exclusively mouth to ear. Most people couldn’t write or read and books were only available relatively recently. But for tens of thousands of years humans have told stories orally, each teller changing the story a bit, missing a bit out or embellishing, adding something in. This is the true nature of stories – and of rivers. I was delighted to find a short video on the Connecting the Culm site about St Margaret’s Brook that runs through Hemyock. St Margaret is another interesting story about a holy woman who is swallowed by a Dragon. Now, it’s my turn to read the story like a map. If you go back in history there are many stories about holy people being swallowed by Dragons, Snakes and Giant fish. This isn’t because the creatures are evil, but rather because they are connected with water and with earth. It’s an initiation. You go inside the belly of the beast – and come out changed.

Then I remembered a story from Indonesia. It’s a story you will know well, only not this version. You don’t think you know it? Oh, yes you do! It’s the story of Cinderella! A really ancient story that has been told in different versions all around the world. But why? In the Indonesian version the fairy godmother is ….a crocodile and to bring about her transformation the heroine has to step inside the crocodile’s mouth. Isn’t that a bit like St Margaret? There is another Dragon still remembered along the Culm. The legend is that at Killerton hill fort a Dragon guards treasure. There is also treasure at Cadbury hill fort on the other side of the river. Apparently the Dragon has to fly backwards and forwards, over the river and between the two forts to protect the treasure. The old English rhyme goes:

‘If Cadbury Castle and Dolbury Hill delve were

This is a bold claim! What is the treasure and why has it never been found?

I spent an afternoon walking the Culm at Killerton. The hill fort that I’ve walked so many times, now high above me. From the river the landscape looked different. Just walking in a different place and the whole perspective changes. I started to wonder if the river itself might be the Dragon – the fairy godmother of the landscape – to be respected, feared even. But when treated in the right way, maybe the Dragon/River can bring about real transformation…… 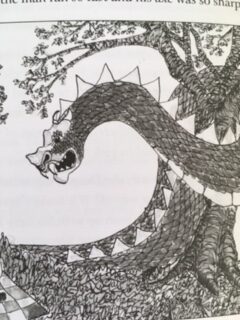